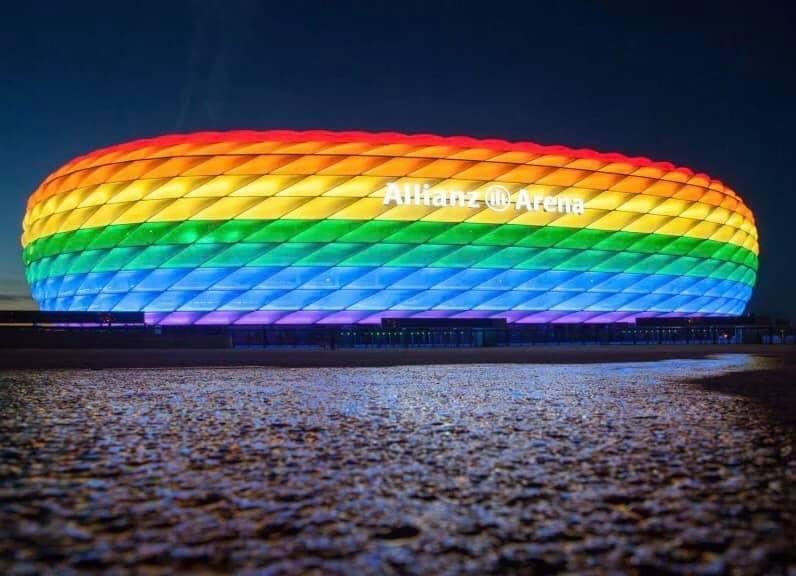 we are concerned about the decision of UEFA, one of the most powerful, if not the most powerful sports organization in the world, to reject Munich’s request to illuminate the Allianz Arena in rainbow colors in response to a homophobic and transphobic law in Hungary.

Precisely because of the power that UEFA has, it would be important for it to stand firmly behind its publicly expressed support for LGBTI people when this is of the greatest importance for the human rights of LGBTI people all over the world, especially currently in Hungary.

In a developed, democratic world, being who you are and loving whoever you love, regardless of gender, is not a political stance, but a fundamental right enshrined in the constitutions of democratic nations as well as in the fundamental charters of the European Union and the United Nations.

A law recently passed in Hungary constitutes a violation of this right. It means that young LGBTI people will be forced to deny their sexual orientation, gender identity, gender expression. It means they will live in fear of public authorities and society. As a result, this will lead to even greater mental health problems for LGBTI people, a higher risk of dropping out of school and, last but not least, more suicides among adolescents.

The law means an increase in intolerance and hatred, as it gives power to those who believe that LGBTI people do not deserve equal treatment, that they are sick or that they should not exist at all.

All this is confirmed by the data that we have recently presented at Legebitra in the report on the situation in schools in Slovenia “LGBT youth: Breaking the Walls of Silence in Schools”. These indicate that LGBTI people who experience more violence during schooling are more likely to drop out prematurely. They also have a lower self-esteem, which leads to additional mental health problems.

Therefore, being an LGBTI person is not an ideology or a political stance and it is not just a matter of Hungary. The fact that the stadium shines in rainbow colors is consequently not a political statement.

The level of homophobia and transphobia is, even in top-level sport, worrying as pointed out by many sports organizations, LGBTI organizations and athletes. And since June is Pride month, this is yet another reason why all stadiums should light up in rainbow colors. Therefore, we are also of the opinion that UEFA should go a step further and propose to other cities and football associations to illuminate football stadiums in rainbow colors for all upcoming EURO 2020 football matches.

We hope that you will reconsider the City of Munich’s request and take the position that the right to be what you are is not a political stance.