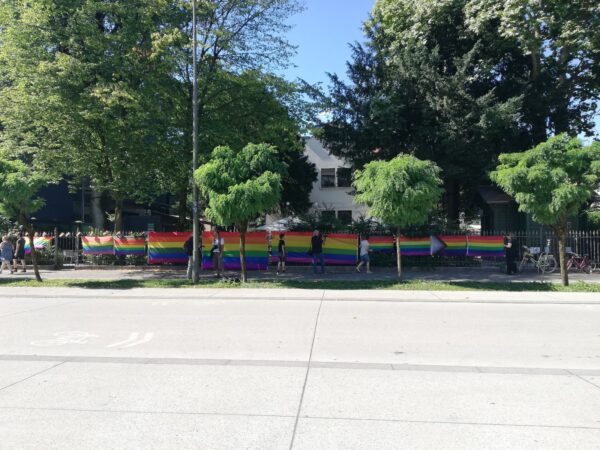 Today, the Prime Ministers of the Visegrad Group, a group of countries that oppose the equality of lesbian, gay, bisexual, transgender, and intersex people and are endangering their livelihood are visiting Slovenia.

Hungary has been actively building hatred against LGBTI people for years. Their discriminatory law banning the public representation of LGBTI content came into force just yesterday. The anti-LGBTI law pushes people back inside their home walls, incites hatred against them, and exposes them to further discrimination and violence. The price for this will be paid by the people with their lives, first and foremost LGBTI people, and then everyone else.

Polish local authorities are declaring that some areas of the country are LGBTI-free zones. In doing so, they label sexual orientation, gender identity, and sex characteristics as an ideology, which is vile and perverted. They deny the humanity of LGBTI people, their equal place in society, their contribution to the development of society, their existence.

In a developed, democratic world, being who you are and loving whoever you love, regardless of gender, is not an ideology, but a fundamental right enshrined in the constitutions of democracies as well as in the fundamental charters of the European Union and the United Nations.

We would like to point out that the Prime Minister of the Republic of Slovenia has repeatedly sided with opponents of equality of LGBTI people and even said that Hungarian anti-LGBTI legeslation can be a model for other countries. (1) Nevertheless, at a time when the eyes of the Europe and world are on Slovenia we call on the Prime Minister and the entire Government of the Republic of Slovenia that: