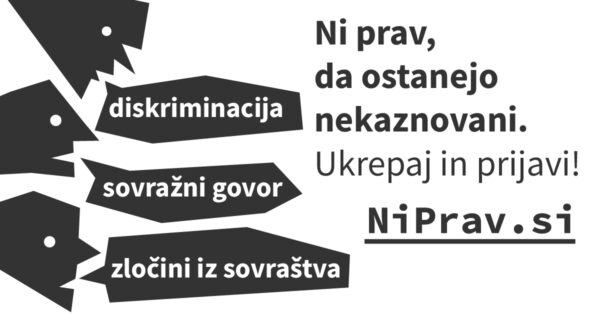 We have been saying for some time now that we can no longer claim that tolerance towards LGBT people (lesbian, gay, bisexual and transgender persons) is improving in Slovenia, as we could have argued a few years ago.

We have been pointing out that homophobia, biphobia and transphobia are ever more direct and widespread in online commentaries, on social networks, and are more often manifested to the streets due to the increasing and more direct spread of hatred, which has also become a part of programs and statements of prominent members of political parties, some so called civic initiatives, and other individuals in positions of power. In the last month alone, there have been two cases of physical violence against individuals and safer spaces for LGBTI people, such as the Tiffany and Monokel clubs in Ljubljana.

The reasons for the rise in homophobic, biphobic and transphobic violence also lie in allowing hatred to become part of the social and political culture. The hateful words have once again been put into action.

We therefore urge the decision-makers to strongly condemn today’s attack on the Tiffany and Monokel clubs and the people who were there, as well as any expression of hatred against all marginalized groups, not only with words but also with actions.

These attacks are merely the result of the social climate that we have allowed to develop in recent years. These developments need to be halted and the trend of increased violence reversed. We call for consistent action against verbal, psychological, physical and other forms of violence, especially if the violence is committed on the basis of marginalised personal circumstances and/or background. We call for the existing legislation to be consistently implemented and, where necessary, upgraded.

We would like to point out in particular that we do not have statistics on hate crimes in Slovenia and therefore do not know how many acts of hatred are committed on the basis of homophobia, transphobia, biphobia or any other form of aversion to any other personal circumstances such as race or ethnicity. We know of individual cases reported to us by survivors or witnesses of violence, or of some that are of high profile in the media. This, to our knowledge, is far from the actual number of hate crimes. This kind of information is important for formulating concrete measures that would properly address and stop such violence.

Since physical violence is just one form of manifestation of hatred, Legebitra has developed a web page https://niprav.si/. If you have experienced any kind of violence based on sexual orientation, gender identity and/or gender expression, you are advised to inform us about the experience of violence through this web page. You can submit a report anonymously, that is, without any personal or contact information. In this case, the information provided will help us to identify the frequency and structure of violence and thus to design appropriate measures. If, however, you feel that you need support in properly addressing concrete violent actions, please enter the contact information in the space provided.